More Love for The Lich Queen! 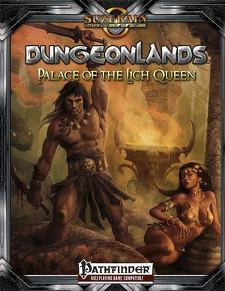 Need something new and original for your Pathfinder game? Find the concept of being hurled through the multiverse only to hunt a powerful lich through her palace appealing? Feel like proving yourself as an adventurer who can take on a real challenge? Then take a look at Palace of the Lich Queen from Savage Mojo, and try not to get lost in the realms! – The Mad Adventurer’s Society

Looks like Palace of the Lich Queen is once more getting enthusiastic reactions from those exposed to it’s evil. This time The Mad Adventurer’s Society weighs in, and their review is resoundingly positive! Not only that, but I was able to hop online with one of their reviewers and answer some questions about our design process and inspiration for the adventure.

Not only that, but a very special preview of the adventure is coming for residents of the Raligh, NC area! Richard Moore, who I dragooned into not only doing design work on it but also into being our editor, will be running selections from it on July 18th!

Tales of the Crimson Boar will be celebrating it’s Fifth Anniversary and Richard will be bringing the pain. Not only will he be running selections from Palace of the Lich Queen, but he will also be doing the first public debut of Suzerain for Pathfinder, which is due to be released soon. The new Suzerain rules truly up the ante on an already deadly adventure, as they provide rules for playing emissaries of the Gods and how to handle a multi-genre game within the Continuum!