The ENnies and Katrina: A Ray of Light in the Darkness 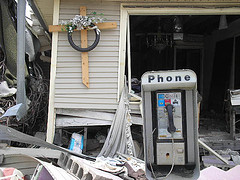 You can blame @JediSoth for and @ExaltedDarkness on Twitter for this post. They thought it should be shared.

Six years ago the ENnies had completely dropped off my radar. I had spent months in rallying support for Planewalker.com as we made our bid and apprehensively crossed our fingers. Then Hurricane Katrina struck and the levees failed shortly thereafter. Like all New Orleanians I had far more pressing matters on my mind than any award, no matter how coveted and prestigious.

My wife, then fiancee, and I were in exile and without resources. With little more than our five cats and a laptop we were forced to bounce from one borrowed roof to another, finally alighting in Dobbs ferry, NY just North of Yonkers. To keep things from being too simple we not only did not have a car but we also had just spent all our resources on the looming wedding and honeymoon. I had a lot of stubborn Creole French pride to swallow as we had nothing to work with.

In addition we knew nothing about the state of any friends or family. The entire 504 area code was down as people everywhere tried to contact loved ones. It was two and half weeks before I even knew the whereabouts of some family and friends. I have not been through anything as grim. It was like being a 5th level PC facing a CR 25 threat, completely overwhelming.

This is where the ENnies come in. You see I got an email from Clueless, one of the other managers. Planewalker had just won it’s first Silver ENnie. In the grand scheme of the disaster it meant nothing. As the first slender ray of sunshine in the dark it was invaluable. At a time when it felt like everything was collapsing around me that moment of recognition for our team was a bit of a lifeline. It was, I believe, the first time I was able to smile after watching the city streets I grew up on submerged.

So, I would like to raise a toast to the ENnies team this year. It is only fair that you know how very much your hard work has meant in the past, and in a way you could never have conceived. Thanks, all of you. I wish I could make ti to GenCon to say it myself.