Converting the Land of the Lost to Pathfinder: Part I 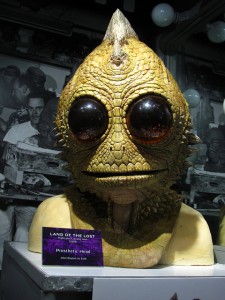 A few weeks ago an old gaming buddy of mine died after protracted terminal illness. Jason Deas was incredibly smart and subversively funny guy who had a love of all things nerdy. This is the first of a series of conversions I’m doing as a memorial to him. Since we both had a love of Land of the Lost, both for the horrible stop motion dinosaurs and for the amazingly sophisticated themes, I will be presenting my Pathfinder version of the Land. This one’s for you. And yes, you can use your Gilbert Godfried voice when playing your sleestak…

Part I: Land of the Lost – A Demiplane

The Land of the Lost is a very small, closed pocket universe that consists of a valley surrounded by mountains. A traveler attempting to pass over the mountains will find himself reentering the valley from the other side.There is one major river flowing through the Land, forming a similarly closed loop; it flows into a cave at one end of the valley and comes back out again in a waterfall at the other end.

The climate of the Land is tropical, and the valley is filled almost entirely with dense jungle. Other major landmarks include a tar pit, a misty swamp filled with dead trees that appears to be locked in darkness even during the day, some high bluffs containing natural caves, and a narrow canyon or chasm that extends into the mountains. The Land lacks a nickel-iron core (or at least a magnetic field), rendering compasses useless.

The Land appears to have three moons. The smallest is also the fastest, moving visibly through the sky. Considering the unusual cosmography of the universe in which the Land is located, however, it is possible that the “moons” are artificial or otherwise illusory.

Manipulation of a Pylon’s crystal matrix table caused the motion of the sun and moons to halt, suggesting that the entire sky may be an illusion. Conjunctions of the moons appear to trigger the activities of some Pylons, including the elevator Pylon and the possession Pylon.

The 2009 movie incarnation of the Land resembles that of the original series, but is actually a dimension where timelines converge. Outside an area of dense jungle is a vast desert where various things, ranging from ice cream trucks and limousines to ferris wheels and oil rigs, crash-land upon arrival and attract the attention of hungry dinosaurs within minutes.

Next up: The Sleestak!

No challenge is intended to the owners of the Land of the Lost copyright. This is a fan tribute created out of love for the original and for a friend.