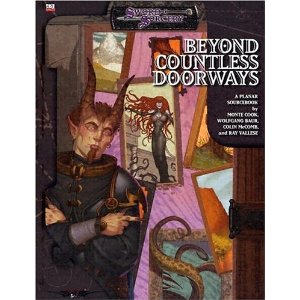 Carrigmoore is a city that appeared in the “Planescape Reunion” book Beyond Countless Doorways. Here it is statted out as a Pathfinder settlement, along with the slightly altered history for the city that we use in our campaigns.

Carrigmoor is an asteroid city under a done, the final remnant of a planet destroyed by mage wars. A planar metropolis that was a center of trade for centuries it has fallen on hard times since a major plague swept the city a few hundred years ago.

After the Great Upheaval, the guilds who had run Sigil for centuries saw the new factions as a terrible threat to their power. Already they had seized control of many of the Cage’s most crucial centers of power. The common histories don’t say how ruthless the Fated were in taking over the office of taxation, or how uncompromising the Godsman takeover of the Great Foundry was. When the Hall of Speakers passed a law declaring dual membership in both a guild and a faction illegal, the guilds were sure it was their death sentence.

A little-known but ambitious gate-city called Carrigmoor was their salvation. Although founded by wizards – refugees from the destruction of an entire world – almost a century before, Carrigmoor had not had much luck persuading planar merchants to use its newly minted portals. Eager for planar-savvy contacts, the masters of the city gave the guilds generous offers of power and influence if they would relocate to Carrigmoor.

The Planewalker’s Guild moved to the Infinite Staircase instead, while others settled for a lesser role in Sigil, but enough of the guilds accepted Carrigmoor’s offer that it was suddenly elevated from Obscure Clueless Hole to Exciting New Place to Be. With the knowledge and experience of the exiled guilds, soon trade and skilled professionals were coming to Carrigmoor from all across the planes. For a time, it seemed as if Carrigmoor would rival the City of Doors itself.

Then, about 200 years ago, Carrigmoor suffered a terrible plague. Reports of the exact nature of this disease are mixed. Some of the oldest guilders insist they symptoms were identical to the plague that decimated most of the Free League soon after Sigil’s Great Upheaval. Others said it was more of a drain on creativity and spirit taken to extremes, a more immediately fatal strain of what was recently known as the Iron Shadow. Still others compared the malady to devil chills or other feared lower planar diseases.

Members of the enigmatic race known as the Merchants Arcane, or simply the mercane, came to the decimated, terrified population of Carrigmoor and told them that they had recently created a city of their own, and that they were offering space for merchants and artisans at very reasonable rates. Desperate for escape, much of the remaining citizenry of Carrigmoor accepted. Only those too poor to leave or too proud to give up their power remained. A few even blamed the mercane for starting the plague, but most dismissed this idea as pure paranoia.

In the past 50 years the factions have begun to take an interest in Carigmoor. Following the examples of the Guilds during the Great Upheaval they have begun to set up bases of operation there and worm their way into controlling the infrastructure of the city. This has resulted in a far more dangerous environment than the old days in Sigil. With no Kriegenstanz to restrain them the conflict between various factions has at times erupted in open and outright violence. The one factor keeping this somewhat civil between them is that too much violence will drive people away as surely as the Plague did.

By Rip Va Wormer, Used and remixed for Planejammer with permission