It’s been a Dark Road to this Golden Hell, but I am now published! 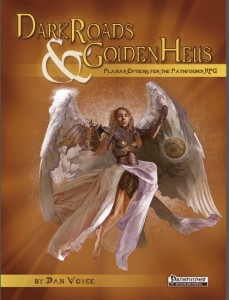 Can’t believe I have not written about this yet! I’ve been so absorbed in preparing for the move that I completely neglected to blog about the fact that I am now published! An actual book!

Up until now almost all of my work in the gaming sphere has been community management. Almost eight years as a manager on Planewalker.com, a time during which we won two silver ENnies, has been fantastic but this is a long-standing dream come true.

Dark Roads and Golden Hells from Open Design is the book in question. A tome of resources for planar adventuring under the Pathfinder rules. I had the pleasure of contributing a plane of existence and a nasty little creature to go with it.

And now back to the mountain of work involved in preparing to move house….