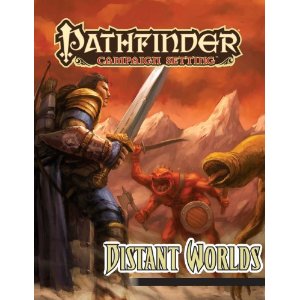 It is a testament to the quality of Paizo’s products that I am about to do something I have not done since the original Ravenloft module was released in the ’80s. I am going to run an adventure *gasp* exactly as written.

Not only that, but I am committed to running the entire adventure path – levels one to fifteen – as presented. Skull and Shackles is just that good.  So far the first installment, The Wormwood Mutiny, is wonderful. From the opening scene where the PCs wake in the hold of a pirate ship after having been press ganged – to the new mechanics for Infamy and Disrepute it is a joy. Major bonus points for both fluff and crunch, something I am coming to expect of Paizo as they continually raise the bar for RPG quality.

Wormwood takes characters from first through third level, giving them a taste of ship board life among a crew of scalawags. Quick and realistic rules for crew interactions, ship board punishments, a fully detailed pirate goddess and other elements combine to give the best take on ship bound adventuring I’ve seen. From these humble beginnings our pirates fight for survival as they work towards mutiny and a ship of their own.

So with ships and pirates and seafaring rules in the mix I’m sure people are wondering how rapidly I’ll be adapting the material to Spelljammer. The answer is 16th Level. You see, the Skull and Shackles adventure path runs from first to fifteenth level taking the PCs from  prisoners to Pirate Lords. Conveniently enough there is a sixteenth level adventure in the works, The Moonscar, that will take the party from Golarion to its satellite. It should make a great jumping off point. From there, after they acquire a spelljamming helm, the  rest of the solar system awaits.

And what a solar system it is, beautifully detailed in Distant Worlds the gazetteer for Golarion’s star system. Spelljammer DMs take heed – this volume belong on your shelf next to Greyspace and Realmspace. It’s a terrific gazetteer of the strange and terrible things that exist beyond Paizo’s core world. Of course, like Golarion itself, there are science fiction elements here as well. Much like Expedition to the Barrier Peaks or the City of the Gods in Mystara, you will find elements like machine intelligences and neural nets interspersed with the more traditional fantasy fare. It;s easily ignored if that doesn’t fit the style of your game so don’t consider it a down point.

So, to recap the plan.

I’ll be blogging about as I go, and as usual you can follow along with the character journals and such on the Obsidian Portal page for the campaign.

Click the links below to purchase these products (we get a few pennies to support our gaming habit if you do).