“Oy! You there, step away from that box! Okay boys, open ‘er up. That’s right….Ah ha! Lookey here, you could’ve gotten a nice price for this one laddie. Too bad your buyer will never see it. Clap ’em in irons!”

Since little in the way of official support has been produced since the conversion to DND v.3.x running a Spelljammer campaign is challenging. Today I’d like to take a look at some published work that can be used to help capture the original feel of the setting. I will also be including notes on my own playtesting as well as the occasional reprinted Open Game Content.

Pulling up the floorboards of the cargo bay, the guards saw a glint of metal beneath. Their mage summoned a ghostflame, and it’s light reflected garishly off of the metal and gears below. “Gnomish devices and smokepowder!’ exclaimed one of the guards. “They’ll hang for sure!” 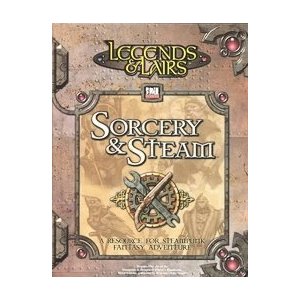 There are two things about Spelljammer that make a big impression on characters: smokepowder and Minoi (Tinker Gnomes). Sorcery and Steam is a steampunk sourcebook from Legends and Lairs, which is immediately usable to bring both of these to d20 life.

Chapter Four: Steamcraft and Black Powder can be just dropped into your game with little to no adjustment. The rules for firearms are not only comprehensive, but also concise and complete. A quick history of firearms gives you a real feel for the tech and the rules that follow address everything from the classic swashbuckler move of flipping your gun around and knocking someone out with the hilt to charging in two guns blazing. There is even a very interesting section on alchemical gunpowders.

Rules and stats for the weaponry is well balanced and effective. One of my favorites is the Ogre Gun, an oversized matchlock rifle designed for Ogres. The first thing I did was change the name to Giff Gun and it was perfect.  It’s stats (Open Game Content) are:

Just the way it should be, in my opinion. Oversized, packs a wallop, weighs a ton. Perfect for a Giff Trooper fighting the Unhuman War. Also perfect for the Ogres working for the Scro.

Now this book is not just useful to resurrect the Starwheel pistol. The steamtech presented here is perfect for anyone using Minoi (tinker gnomes) in a campaign. Dozens of odd pseudo-technological devices can be found in its pages, complete with the essential malfunction charts. Add even more spinning gears, belching steam and noise to your descriptions and voila, tinker gnome devices!

I think the rest of this book contains some gems, and although the most immediately useful data is in Chapter Four there is much that might be of use scattered throughout .The Gun Glyph prestige class is a prime example. If starwheel pistols are common in your game then this is a firearms based counterpart to the Arcane Archer in the dungeon Masters Guide. It’s a wizard who bonds to one particular gun and learns to focus spells through it, as well as other potent abilities.

The skills, feats and spells here are mostly things I would not use in a Spelljammer game, however there are some that work nicely. Rapid Reload is a great feat for a Starwheel packing privateer jaunting about Wildspace.

He spread his map across the stained tabletop and moved the candle closer. The flickering light played across a tattered phlogiston chart, obviously one that had seen much use. “Here,” he said, pointing at a sphere surrounded with warning glyphs. If we can find a way to survive the poisonous atmosphere we may be able to find the City of Gates. According to my principle, he can open these gates for us and take us anywhere we can imagine in the Spheres and beyond. Yeah, he calls himself an Opener.

To some Spelljammer is about exploration, about boldy going where no elf (of Halfling, dwarf, or Xixchill) has gone before. Well Beyond Countless Doorways from Sword and Sorcery Press will take you there. This book is a reunion of almost all of the people who designed Planescape. Nineteen of the twenty chapters are detailed treatments of new planes of existence. The beautiful thing about this for a d20 Spelljammer game is that nine of these are alternate prime material planes. In other words Crystal Spheres. From Carrigmoor, a planar metropolis under a crystal dome floating in the fouled atmosphere of its destroyed planet, to The Lizard Kingdoms home of the Scalykind this is instantly useful to anyone DMing exploration.

This book also provides very serviceable stats for another old school Spelljammer element, better Lizardmen. Chapter Nine: The Lizard Kingdoms give a small and a large option, the Dire Kobold and the Giant Lizardman. The Giant Lizardman is very nice for Spelljamming Scalykind, although it does have a level adjustment of +3 for use as a character. Lets take a look at it as it stands in the book and then apply the minimum tweaks needed to use it in SJ.

The description of the Giant Lizardfolk not only stresses their size, but it also states that they are smarter and more technologically advanced than their cousins. Sounds and awful lot like the description in the Spacefarer’s Handbook a long time ago….

So these guys are large, no big deal. So are the Giff, that’s an easy transition. Really all I have done in my own campaign (The Warriors of The Balance) is change their Favored Classes to Fighter/Sorceror and give them access to Helms through the Arcane / Mercane Trading Houses. Quick, easy, and a change from what the groundlings normally expect.

The Lizard Kingdoms alone offer an excellent planetfall, but so do many others. There is Carrigmoor, an asteroid city filled with gates to other planes. It floats on the remnants of its destroyed planet amidst a poisoned atmosphere, a certain challenge for explorers.  Avidarel is a sphere where all has decayed and the Sun has died. In the midst of the entropy lies the Last Tower and its mysterious occupants. From Yragon and it’s sentient viruses to Dendri, an arachnea world invaded by formorians, there are new and exotic places to populate the frontier of any Spelljammer game.

You think the Arcane Inner flow is the only cluster of civilized spheres? Ha! The Vodoni Empire would have something to say about that, as would the Maelstrom, The Mercane Outer Flow, and the Federation of The Solar Wind. The Prime Material Plane contains more Crystal Spheres than you can imagine my young friend. And ships of every description sail between them… 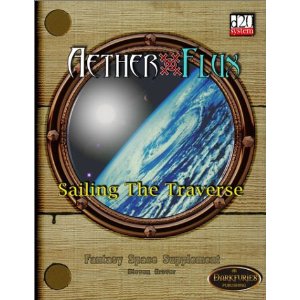 Aether and Flux by Darkfuries Publishing is a fantasy space supplement similar to Spelljammer. As such it provides a pretty solid collection of data under one slim cover. To me, the most immediately useful thing in it a an array of new ships. The best way to get a group of PCs curious is to have them encounter a ship they have never seen before. From the Elven Ormralest, a living ship of Armada size completely unlike any elven ship yet encountered, to the lovely fantail ship of the humans these will make excellent additions to your dock. If there is a heavy “groundlings in space,” aspect to your game there are many different designs of space equipped seagoing vessels. My favorite part is Maythorne’s Wheel, a fully developed space station.

Aether and Flux | Sorcery and Steam | Beyond Countless Doorways