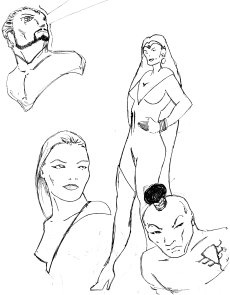 To generate your character’s statistics, use my standard method:

Your PC will begin with three character levels to spend on class (one or more) and race (yes, some races cost a character level). This translates to 3000 experience points. This also means that you will have 2700 gold pieces to spend on starting equipment (more on that later).

Class choices are pretty extensive. You are free to choose from any of the core classes , or any classes that appear in most official WOTC publications, Malhavoc publications, or Dreamscarred Press publications. The DM is always available for consultation.

Character race also gives you many options. In addition to the races presented in the core materials, there are a number of races specific to the Planescape and Spelljammer settings which appear in our house rules book. The Races series from WOTC is considered cannon for our games as well.  In addition to race, you also have to choose whether your character is from the Material Plane (a Prime) or native to the Outer/Inner Planes (a Planar).

There are two other character aspects that you should take into account when creating your character. The first is the concept of Prestige Classes. These are specialized and elite roles available to veteran adventurers. Almost any normal class can choose almost any Prestige Class. Unfortunately, the 3E mechanics are set up such that you basically have to build your character to become one of them right from the start. Many are built such that you can’t take them on the spur of the moment. Also, in general, a character has to be at least 5th level before he can become a member of one. Available Prestige Classes include those published in WOTC books and Magazines, others are approved on a case by case basis by the DM.

As I mentioned earlier, you will be starting with a 3rd level character. Since the PC has been around for a bit, he’s got some stuff – 2700 gold worth of stuff to be exact. This figure covers not only mundane gear such as clothing and backpacks, but also any exceptional (masterwork tools / planar metal weapons) or magical (healing potions) items that the character has.

I will also be handing out character- specific magic items. These are items of relatively minor power that fit in with your character’s concept.

Character Backgrounds will be worked out jointly by the player and DM. Creative character concepts are encouraged.

Sketch of The Lightbringers  (Dart, Seluna of the Vesve, and Meng Kung Gao.) by Randall Eharb aka Duke Sir Dartalon Rix