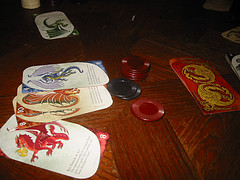 These are two games put out by WOTC. Three Dragon Ante is a card game and Inn Fighting is a card/dice game. They are both supposed to have the advantage of extensible rules that allow playing them in character during a Dungeons and Dragons game.

I’ve had Three Dragon Ante for awhile now and as a standalone card game its great. WOTC has even put the rules up online so that your players can easily snag a copy. (There is also a more straightforward presentation of the rules up on Wikipedia, FYI.) While I have not tried out the “in character” option as yet it looks solid. Basically if you have more than five ranks in any of a number of skills you gain a special ability to use while playing. I’ll report back on that once we have tested it out.

That said we come to Inn Fighting. It is supposed to be a bar room brawl game. Something I thought would be excellent for adding some freestyle action to our party’s next bar fight at The Rockrat. You see there is supposed to be a template online that allows you to make cards for your characters (cards represent those involved in the fight). It was a major reason that I picked the game up.

Alas it is not to be. At least not as promised on the card insert included in the game. Doing a little googling around I discovered a thread on the WOTC forums on this subject that show that not only has it not ever been online, but als that it probably never will be. Now I don’t think that one failing like this should drive one’s business away I do find it yet another in a long stream of bad decisions made during the Hasbro era. Canceling Dungeon and Dragon Magazines comes readily to mind.

Anyway, being industrious geeks as we gamers are Dark Kitten Productions has thrown up a homebrew template system that is the best we can do for now.

I am glad to see Pathfinder and the various 3.5 based efforts of independants like Dreamscarred Press forging ahead while WOTC focusses on 4e. While I dearly love a lot of things that WOTC has produced I am weary of missing indexes, lack of support (anyone remember Fluid Software?), and a quantity over quality perspective on publishing.

It is a shame.