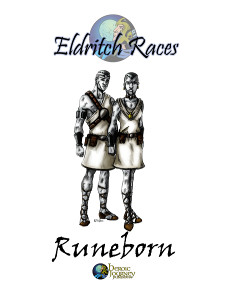 5 out of 5 Stars. They are an intriguing race well suited to play as adventurers or be encountered in unusual and unexpected locations. […] Overall, the Runeborn are an unusual race but one with considerable possibilities for use in a campaign.

Native to the game world’s moon, the Runeborn came to our world through an ancient lunar gate that ceased functioning shortly thereafter. For generations they have maintained a secret presence on our world.
An eldritch blend of mortal humanoid and living lunar metal they are an unusual breed to say the least.  Well adapted to the airless reaches of their home world, they have found ours to be an abundant paradise by comparison.

Coming in at 11 RP it is balanced against the PC races presented in the Pathfinder Core Rules.